Posted by admin on Friday, June 19th, 2020 in Uncategorized
no Comment.

Prestige is declaring Juneteenth an official company holiday. Juneteenth is the oldest nationally celebrated commemoration of the ending of slavery in the United States.  Dating back to 1865, it was on June 19th that the Union soldiers, led by Major General Gordon Granger, landed at Galveston, Texas with news that the war had ended and that the enslaved were now free. Marking Juneteenth an official company holiday on an annual basis is recognition of its importance to American history and encourages the team at Prestige to take time to reflect on how we can celebrate diversity and support racial equality in our daily lives. We encourage our team to use this day to support the movement for racial equality. 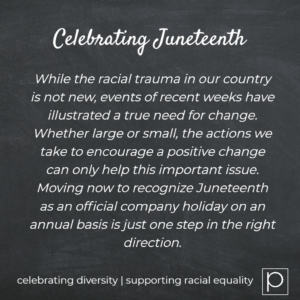 The following are a few ways to provide support:

While the murder of George Floyd, right here in Minneapolis, was a catalyst in the fight for racial justice and equality, racism has been a serious issue throughout our country’s history. The massive outcry on social media and in person at protests has sparked the beginning of massive change.

At Prestige, we believe we should focus on the positive impact these united voices are having:

While the racial trauma in our country is not new, events of recent weeks have illustrated a true need for change. Whether large or small, the actions we take to encourage a positive change can only help this important issue. Moving now to recognize Juneteenth as an official company holiday on an annual basis is just one step in the right direction. In the coming weeks, Prestige will be sharing other ways that we will be supporting this movement and advocating for positive change.

Let us help save you time and make your meeting
or event a success!